It was only by chance, or more accurately, Providence, that we found out that Karen’s niece’s husband, Chris, would be in Golden on the same day we arrived. He has been on the road for several weeks with the group HaYovel participating in the Zion’s Sake conferences. The conference was just wrapping up when we hit town and they would be leaving the next morning but Chris was free for the rest of the afternoon and evening and joined us on our quest for pizza and beer.

We ate here a couple of years ago but don’t remember the inside being so dark and dingy. Luckily, though, we got seated outside at a table just big enough for two large pizzas – well, almost big enough. The pizza was good enough and Chris got to take the other half of his with him. Sure hope he doesn’t have to share it with anybody.

Other than the obvious one, there are three breweries in Golden but one of them is apparently so new that it didn’t come up on my Google maps app so we went to the ones we could easily find. The first one was Golden City Brewery, “the second largest brewery in Golden”, or so they say. On their lineup was one called Lookout Stout but they didn’t have it available due to lack of keg space or something. So, we all had their Legendary Red Ale instead and we all agreed it was quite good. We may get a chance to go back later while we’re still in the area in hopes that they’ve found space for that stout.

Just a few blocks away we found Mountain Toad Brewing. After sampling a couple of contenders, Karen chose 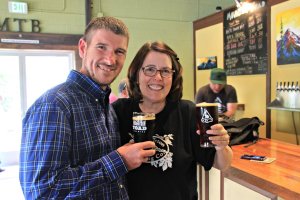 the Apex Amber which is medium bodied and more malty than hoppy – just the right combination. Chris and I both went with the Ryrish Stout which is an Irish stout made with rye. Full-bodied, roasty with a little spice, it went down smooth. I hope to have another while we’re here. But Karen’s amber ale was pretty darn good, too, so Chris and I both had one of those as well.

Lookout Mountain for the incredible views of Golden on one side and the foothills on the other. The time went by much too quickly but it was good to see Chris and get to hear more about his experiences bringing in the grape harvests in Israel.