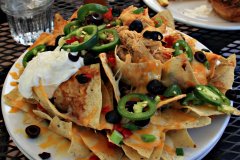 So, Friday after work we hit the Breckenridge Brew Pub. We were about 15 minutes early for their happy hour so we ordered food and asked for the beer to be brought when happy hour started. Hey, two dollars saved is two dollars earned, right? My nachos and Karen’s pulled pork sandwich arrived at our outdoor seating table and it wasn’t long before her Vanilla Porter and my Avalanche Amber showed up as well. 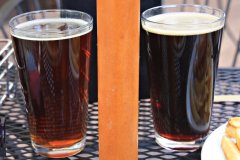 There was another brew pub not far away in Dillon so we thought it would be a good idea to give them a chance, too, so off we went. It was happy hour at Pug Ryan’s Brewing Company, we got to sit outside and pints were only $2.50. I had their Deadeye Dunkel, Karen had the Outlaw Stout. 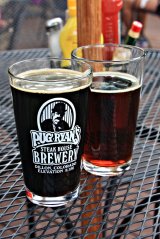 They say the stout is made with “an elixir of Jim Beam, Frangelico, Meyers rum and vanilla”. These flavors were very subtle and suited the stout quite well. Although the dunkel was lighter in color than one would expect, it was a beautiful mahogany, very malty with only a hint of hops. We both thought it was worth the drive over to Dillon and on the way back we drove through a couple of campgrounds in the White River National Forest on Dillon Reservoir that we wouldn’t mind spending some time at someday. 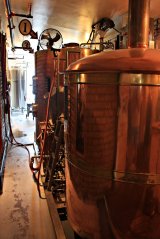 The next morning we drove to Frisco and had breakfast at the Butterhorn Bakery & Cafe and once again enjoyed sitting outside.

I was too anxious to dig in to my egg, cheese and bacon sandwich on croissant with a side of patty sausage, and forgot to snap any pictures of it or Karen’s whole grain French toast with a side of bacon. Mine was delicious but Karen would have enjoyed hers more if it had been warmer. The waitress offered to have it rewarmed but Karen didn’t want to have to wait any longer for it so we took advantage of her offer to choose a couple of cookies from the bakery to make up for it instead. 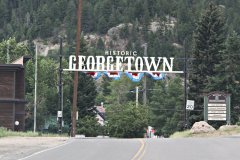 After breakfast we drove east on I-70, across the continental divide and through the Eisenhower Tunnel to Central City. This used to be a charming old mining town but casino gambling was introduced back in the 1990s and the place has lost all that charm, although many of the historic buildings remain. 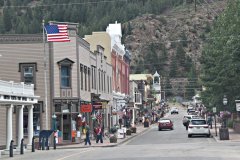 We drove around a bit but didn’t stay long and instead exited the interstate on the return trip at Georgetown. Now Georgetown was interesting in that there were no VW buses, brew pubs or wood-fired brick oven pizzas to be found but what we did find was plenty of historic charm. After driving up and down nearly every street we made our way back to Main Street and walked both sides of the historical district. The lady behind the counter at the old grocery/sundries store told us that the store and building once belonged to her great-grandfather. 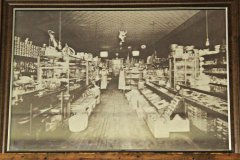 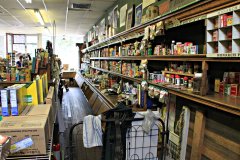 Although stocked with modern goods, much of the display shelves and the creaking wooden floor are original to the building. We did make one attempt for a beer at the Lucha Cantina but it was too warm inside the airless building, the table was dirty and the beer list wasn’t that interesting. So we left, knowing there was a brewery in Frisco and a pizzeria in Breckenridge.

The Backcountry Brewery had enough different good-sounding beers on tap that I opted for a flight, which consisted of all five of their year-round offerings plus my choice of two of their seasonals. 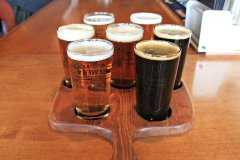 I almost never order that sort of thing because I know I’m not really going to be crazy about at least half of them (in this case the wheat, pilsner and IPA) but the other half were that intriguing (amber, porter, maibock and imperial stout). They were all pretty good, especially the intriguing half. Karen had a pint of the amber and thought it was the best of them all. 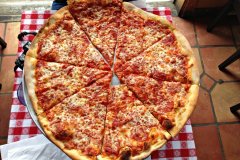 Our last stop of the day would be back in Breckenridge at Giampietro Pasta & Pizzeria. It’s a tiny place and there was a line to get in but being a party of two we got seated at a small table straight away. While I was gone trying to find a place to deposit my used beer, Karen ordered our pizza. Knowing that the thin crust that we like isn’t what they normally do, she asked them to make ours using less dough and that’s apparently what they did because the crust came out nice and thin and crisp and delicious.