It was a year ago that we were in Bend, Oregon, navigating the Bend Ale Trail, when we stumbled upon the newest brewery in town at the time, Rat Hole Brewing. Because of their excellent brews, delicious food and friendly hospitality, they quickly became our favorite Oregon brewery.

So it’s now a year later and when we arrived back in Bend we didn’t waste any time getting over to see how things were going for Al and Susan at the Rat Hole. It was Monday afternoon and the place was packed. But that’s not surprising with their new food menu and the same great beer. Our favorites are the Fence Post Porter and the Rotation Red. We were amazed when we sat at the bar and Susan not only recognized us but even remembered our names.

We were delighted to find that they still had those spicy pistachios but we also came hungry so I ordered the Rat Hole Burger and Karen had the Rat Pattie Sliders. Both were outstanding and we’ll be anxious to try some of the other items on future visits.

We did stop by a couple of days later for “just a beer”.

What we weren’t expecting was live music but once The Wampus Cats started playing we weren’t in any hurry to leave and stayed for the duration. Rachel played the guitar, banjo, fiddle and harmonica and Matt gets a great sound from his resonator guitar. They were a lot of fun and we enjoyed their show … and the Fence Post Porter!

We were fortunate enough to be here in Bend for Rat Hole’s 1st Year Anniversary Party. And what a great party is was! 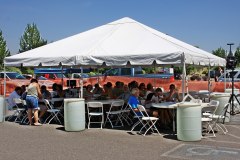 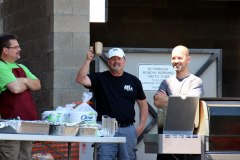 They had a tent, 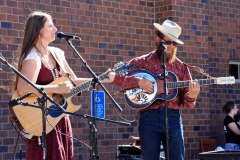 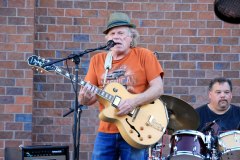 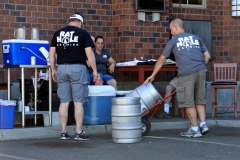 live music from four groups and,

We were a little disappointed at first because they were limited to only four of their beers for the party and the porter was not one of them. But that still left us with the Rotation Red and their Rat Hole Rye IPA which are both outstanding. However, a little while into the festivities, Al and Susan came over to our table and discreetly handed us two Fence Post Porters! That slight disappointment from earlier was long gone but this made us feel quite special.

Leave a Reply to David and Karen Cancel reply