After two days of barbeque overload we were ready to indulge in some really good Tex-Mex. So, after driving around north of Marble Falls looking at some property we’d seen online with killer hilltop views, 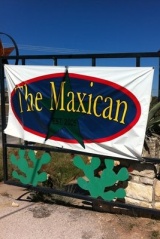 we made our way just a little further north to Burnet and The Maxican, our favorite hill country Mexican restaurant. The chips & salsa were just what we needed and Karen’s Mexico City Tacos and the Tacos a la Plancha that I had were delicious. We followed that up with one of the best Tres Leches desserts either of us can remember.

Our next stop would be back in Marble Falls at Double Horn Brewing, a great little brew pub we have to visit anytime we’re nearby. They have a good selection of their own beers in addition to guest beers from other local area brewers.

Today, Karen had the Antler Amber and I chose the Burn Out Rye which was a little hoppy but not too much, especially for an IPA. I followed that up with the Dunkelweizen, a malty wheat beer that was not as dark as the name suggests but very good.

We knew that just two towns to the south on

Highway 281 was Blanco, the home of Real Ale Brewing and that, this being Friday, they would be giving free samples from 2 to 5. We also knew, from looking at their website earlier, that their Coffee Porter was back in season and we hoped to find that on tap. We were not disappointed. We also sampled their 15th Anniversary Ale, a Russian imperial stout, and their Pumpkin Spice Ale. It’s actually a good thing getting the little 4-ounce tasters so you can try several different beers. After another Coffee Porter it was time to get home and let Jake and Peggy out for a walk.

On the way home I had a great idea. We could drive back down to Wimberley and Middleton Brewing to have that Pepperhead Ale. And since they welcome dogs at their taproom, Jake and Peggy could go, too! The dogs always get excited to ride in the car but when they do it’s typically to either go to the groomer or the vet so it never ends well for them. 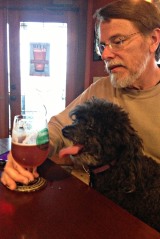 Apparently, Jake started remembering this on the way to the brewery and was really worked up by the time we got there. They both settled down, though, once they had a beer in front of them. This was their first brewery and they had a good time. Even though they didn’t get any beer they did get to lick the condensation off the glass.