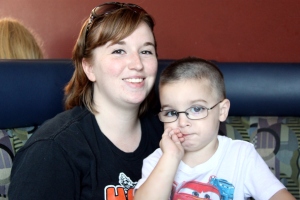 Since we’ve decided to skip Seattle this time, due to the lack of available space at a decent RV park, we made the two-hour drive from Portland to Dupont, Washington, for a much-too-quick visit with granddaughter Caitlyn and her precious and adorable little ones, Lane and Charlene. Well, it would have been only two hours if not for the accident on Interstate 5 just four miles from our exit.

No problem even if it had taken twice that long – the reward at the end of the drive was well worth it! We met at a restaurant that serves mediocre pizza (what a waste of a really neat wood-fired oven) and since that time went by way too fast we figured we had to at least try to get on base (Fort Lewis) and extend our visit. 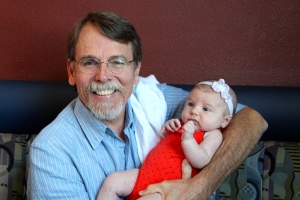 After jumping through a few bureaucratic hoops we managed to get a pass and had Elmo on the tube for Lane shortly thereafter. What happened next was pretty scary but it could have been a lot worse. In Karen’s own words “…Went to their house and got bit by their ugly big dog! Terrifying! He nipped at my hip first as Caitlyn was showing me Lane’s room, then he attacked my heel and wouldn’t let go. He was so strong he was able to pull me three or so feet down the hall! David was holding the baby so he wasn’t able to help. Caitlyn had to struggle to get the dog to let go of my heel. …”. Caitlyn had already decided that having the dog was a mistake and was trying to find him another home. Now she just wants him out of hers. Smart girl!

This entry was posted in Washington and tagged Travel, Washington. Bookmark the permalink.