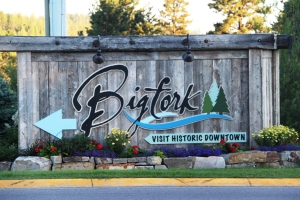 instead of near Glacier National Park. That’s because we went to the park only once but after discovering the Flathead Lake Brewing Company and the mighty fine Italian restaurant, When In Rome, we made the 30+ mile trip daily. We had seen the great reviews about the pizza on Yelp but while at the brewery, we got a recommendation for the schnitzel at the Bigfork Inn.

That and the smoked mixed grill was pretty good but the next day we had to go try that pizza. The first thing we noticed was the place was packed and we were asked if we had a reservation. Well, no, but they did find us a table outside anyway. If we had known the pizza was going to be that good we never would have ordered just one to share! There was only one thing to do to correct that mistake … we went back the next day! 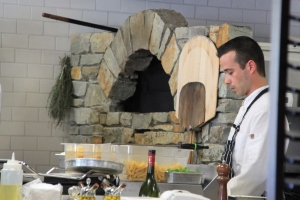 Their sign outside says Best Pizza in Montana and we believe!

After the pizza we stopped by FLBC for one last pint and then we drove all the way around Flathead Lake, seeing lots of cherry orchards on the east side 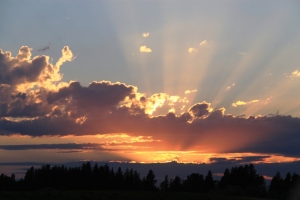 and what would have been spectacular views of the mountains, if not for the haze, on the west side. We were treated to this beautiful sunset, though!